That's the Spirit
Posted by myfilmblog.com

PopMatters took a look at two latest aquisitions by Alive Mind Media that stresses their commitment to releasing “specialty documentary programming in the areas of enlightened conscious: "So Help Me God" directed by Simon Cole and "Meditate and Destroy" directed by Sarah Fisher:

Meditate and Destroy focuses on former bad boy turned author and Buddhist teacher Noah Levine. As much a teaching tool as a mini-biography, we learn of the drug addled and crime filled life that transformed this self-proclaimed punk into a force for good in the realm of spiritual guidance. While Levine’s story has much more dramatic punch, it is frequently compromised by director Sarah Fisher’s desire to hard sell the man’s ‘ministry’ and teachings. Cole, on the other hand creates a Religulous like experience in which questions of dogmatic inconsistency provide fodder for humor - and occasional insight.

Indeed, So…Help Me God accomplishes the basic tenets of its set-up. Cole comes across as good natured and genuine, never openly confronting his hosts like HBO pundit Bill Maher did during his documentary. Certainly he lets the subjects spewing hate hang themselves with obvious clarity (a family of rabid homosexual hating zealots are exposed for the robot minding morons they are), but he also wants to understand and experience the substance of religious devotion. After speaking with all manner of types - Muslim, Jew, Hindi, Buddhist, etc. - he decides to confront his quandary head on. Setting up a tent in the desert, he explores the reasons and the need for faith. His last act revelation falls in line with the rest of So…Help Me God‘s direct designs.

Fierce Light - Revolution of the Spirit
Posted by myfilmblog.com

"Revolution of the Spirit in Burma", featuring Nobel Laureate Aung San Suu Kyi and Alan Clements, the first American ordained as a Buddhist monk in Burma, is one of the DVD extras on Rippers newly released Fierce Light: When Spirit Meets Action documentary. Includes clips from U2's recent concert in Barcelona launched in Canada and available here at MyFilmBlog.

Aung San Suu Kyi is the leader of the nonviolent movement for human rights and democracy in Burma (Myanmar), a Nobel laureate who is under house arrest. Alan Clement is the first American to ordain as a Buddhist monk in Burma. He is an author, Instinct for Freedom and The Voice of Hope -Conversations with Burma's Aung San Suu Kyi.

So Help Me God
Posted by Elizabeth

In Religulous, Bill Maher was on a satirical quest to find God and understand religion while laughing at the extraordinary claims by the religious. The advertising guru, Simon Cole, took a completely different approach in his documentary film "So Help Me God." It’s not a comedy, but rather it is a drama – portraying a real spiritual quest to find God.

Instead of laughing at the religious and what they say, he listened and asked questions trying to understand God. Going from one religion to another, from one denomination to another, he begins to realize that the question is not only where God is, but who’s God is the right one. Everyone is convinced their God is the one, but how can you truly believe it if there are so many religions in the world?

It was delightful when occasional, genuine humor would distract you from the truth. While talking to Presbyterians about homosexuals one of the older guys, probably in his 70 said, "Don’t you love that all these fundamentalists quote the King James Version; and he was as queer as three dollar bill."

You can’t help but laugh.

If you want something refreshing, something personal, and powerful – watch "So Help Me God." As an atheist you will see religion from a different perspective and as a theist you will enjoy Simon’s search for God. It’s very healthy to search for the unknown as it takes courage, especially when the unknown defies the mainstream status quo.

A personal master piece that will leave your mind in a deep thought contemplating about your own spiritual state of mind. You owe it to yourself to watch it.

Read the original article here or watch «So Help Me God» trailer.

Meditate and Destroy- Now on VOD!
Posted by myfilmblog.com 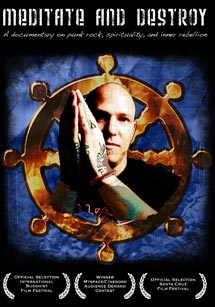 Meditate & Destroy is now accessible to viewers from the comfort of their homes or on the go exclusively via Alive Mind's Video On Demand service. Meditate and Destroy is an 81-minute documentary about punk rock, spirituality, and inner rebellion. The film focuses on the bestselling author of Dharma Punx and Against the Stream, Noah Levine. Tattoos, motorcycles, and Buddha are featured in this hard-hitting look at how Buddhism has a place in the world of punks. This inspiring film opens our perception to the possibilities of finding new paths- even in our darkest hours.

This film provides an up-close look at how the driving forces in Noah’s life changed from violence, addiction and rebellion to taking on the role of dedicated meditation teacher and community leader - an individual whose candor inspires others to integrate Buddhist teachings of nonviolence and inner peace with a Western lifestyle.

Available to all U.S households or mobile devices with a high-speed Internet connection, Meditate & Destroy will inspire viewers to embrace the transformational power of Buddhism.

I hope you enjoy this quirky, unconventional film.

So Help Me God
Posted by myfilmblog.com

You might think you know what to expect of this film on the basis of the title. Yet, shoehorning So Help Me God into the category of spiritual documentaries would not be quite right, as the film is a highly personal story of exploration, brisk yet thought-provoking, not to mention visually captivating. Our protagonist is one Simon Cole, a well-off man, happily married and seemingly economically unburdened. Simon however carries a load he regretfully cannot drop off his shoulders--he greatly longs for a connection to God. This is a presence Simon does not have in his life and he is driven to at the very least understand it.

As such, he strikes out on the journey that will be the subject of the documentary, done in collaboration with his two brothers Ben and Nigel Cole. With a background in commercials, the brothers bring a visually expressive eye to the proceedings, adding a new dimension of sight and sound that keeps the documentary from slipping into dry discussion. It helps that Simon is a personable and earnest interviewer who does not hesitate to bare his regrets and fears to the camera. The film also benefits from a variety of religious figureheads who share their opinions with a candid openness that echoes throughout the film.

This is an honest attempt to explore one man’s religious conundrum, yet Simon personifies those of us who have questioned their faith or lack thereof. He is earnest and steadfast, a narrator without a shadowy agenda to ridicule or challenge the beliefs of those he encounters and questions. He is burdened by his dilemma and seeks an answer to it in any way he knows how. The final scenes of Simon isolating himself to the desert for some serious soul-searching are among the most emotionally affecting in the film – you can see the exhaustion and difficulty to cope transcribed on Simon’s face. So Help Me God is his story, and it is an exhilarating one.